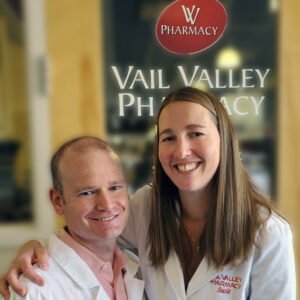 We promptly moved to Colorado Springs and quickly caught the ski bug! After 4 years of spending all of our free time in Summit or Eagle county, we made the move to the mountains.

Bruce brings to the table quite a variety of experience, having started out his career in long term care at HHS Pharmacy in Toledo, Ohio. He then switched over to retail pharmacy at Walgreens with the move to Colorado. A few years later, he got the opportunity to work in-patient at Fort Carson in Colorado Springs. The move to the mountains brought him to City Market Avon, and from there he was recruited to work at Vail Valley Pharmacy.

Susie began her career at an independent pharmacy in Toledo called Ryan Pharmacy and Orthopedics. The next employer was Walgreens, both in Ohio and in Colorado Springs. Again, the move to the mountains brought her first to City Market Breckenridge, and then to City Market Dillon, where she spent the last 10 years before being hired at Vail Valley Pharmacy in May 2020.

We both love forging relationships and building trust with our patients, customers, and healthcare providers. With us, you will never be just a number! We have been married since pharmacy school, and have two beautiful children, Isaac and Gretchen, who also have the ski bug! When not working or skiing, we also enjoy hiking, offroading, and camping. We are so excited to call the Vail Valley home, and are humbled by the support the community has shown so far.